The New York Review of Books

The New York Review of Books 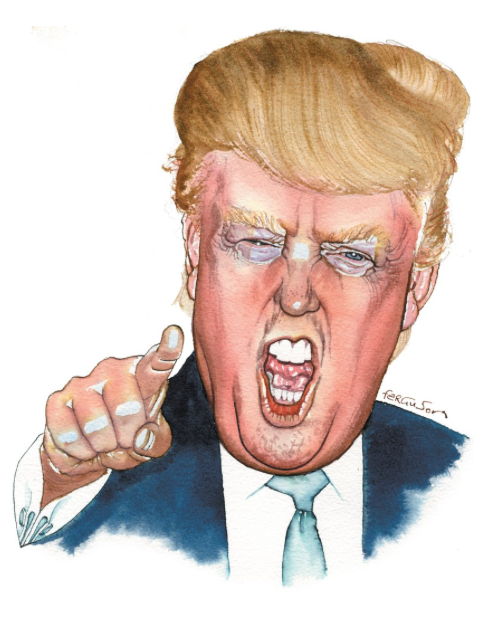 All American elections tend to be touted as historic, for all American culture tends toward the condition of hype. Flummoxing, then, to be confronted with a struggle for political power in which, for once, all is at stake. We have long since forfeited the words to confront it, rendering superlatives threadbare, impotent. No accident that among so many other things Donald J. Trump is the Candidate of Dead Words, spewing “fantastic” and “amazing” and “huge” in all directions, clogging the airtime broadcasters have lavished upon him with a deadening rhetoric reminiscent of the raving man hunched beside you on the bar stool. “This country is a disaster.” “We’re in big trouble, folks.” “Our leaders don’t know what they’re doing.” Or his favorite declarative closer to those 140-character Twitter dispatches that form the campaign’s anti-poetry, “Sad!” It is our loss that Mario Cuomo, who famously offered that “you campaign in poetry; you govern in prose,” is no longer here to enlighten us about in what, if we campaign in tweets and dead superlatives, we are destined to govern.

We have no idea. While on one side we have a vague conception of what our future politics might be—a professedly progressive government of familiar faces and uncertain success, dogged to a greater or lesser degree by congressional opposition and revivified scandal—on the other we have terrifyingly little notion. For the animating element of the Trump campaign, beyond its self-propelling cycle of insult and crass entertainment, is not a positive political program—renegotiating trade deals or imposing a Muslim immigration ban or even building an “impenetrable and beautiful” Mexico wall—but a kind of furious and exasperated nihilism about government as it exists and the broader discredited elite from which it emanates: the corruption, the back-scratching, the self-dealing.
The most powerful emotion one feels at a Trump rally is a great bellowing lust to scrub thoroughly the Augean stables and to entertain raucously while shoveling out the shit.1 Throw them out! And the “them,” it should be emphasized, is proudly nonpartisan: the elite of the Republican Party counts as corrupt as that of the Democratic; longtime conservative newspapers are no less representatives of the “lamestream media” than the liberal New York Times.
Thus their candidate may declare that he might refuse to support NATO members in the Baltics or that he might offer nuclear weapons to the Japanese or South Koreans or apply waterboarding or something “a hell of a lot worse” to any captured terrorist. Whatever principle of the postwar Pax Americana he blithely shatters, and however many “national security leaders” from Republican administrations issue yet another condemnation of Trump and pledge to vote for Hillary, this will do little but reassure his supporters. That their candidate offends, disgusts, appalls the elite and won’t seriously apologize for it, that, as we have seen, he refuses to back down from the grossest violations of “politically correct” discourse in matters of race and sex, reaffirms that he, unlike all who have come before with their pallid pledges to “change Washington,” might actually do it. The shocked, disgusted elite is not only an object of scorn and derision but an affirmation of his strength. And he is all about strength, a kind of embodied id.
It is this darkly echoing “no!” at the heart of the Trump campaign, joined to its permanent revolution of insult and entertainment, that makes the present moment so vertiginous. We have lived moments before in which the heretofore unquestioned political lineaments of our world seemed rendered suddenly unstable, fragile, mutable. But these were moments of sudden violence—the world-altering rifle shots of 1963 and 1968; the planes and towers of 2001—not a slow-motion reality freak show in which what we had believed to be the remaining sacrosanct conventions of our politics were thoroughly and methodically trampled underfoot like so many discarded banners and placards, so many punctured balloons…
What are these bedraggled balloons? Truth, say? Facts? An attention to qualifications? A respect for experience? An attending to…rationality? It is true that Trump appalls with the baroque flagrancy of his vanity and self-obsession, like those neurotics we sometimes meet whose obsessions are so self-assertive that we seem to be staring directly into their skulls: as with them, the forced intimacy of the encounter can border on the nauseating.
But perhaps this is all sanctimonious illusion. Perhaps we are seeing punctured here misconceptions long entertained, perpetuated through lack of challenge. Ronald Reagan, of whom Trump in some ways is a caricature,2 maintained a decidedly capricious relationship with the truth. George W. Bush’s self-styled imperial administration declared that “we’re an empire now, and when we act, we create our own reality….” Is Trump simply thrusting full into our faces currents we have struggled to ignore? The “plunge of civilization into this abyss of blood and darkness,” wrote Henry James at the outset of World War I,

so gives away the whole long age during which we have supposed the world to be, with whatever abatement, gradually bettering, that to have to take it all now for what the treacherous years were all the while really making for and meaning is too tragic for any words.

Is Donald J. Trump really what the whole long age was gradually making for and meaning? That a reality television star and businessman con artist devoid of public office experience and proudly ignorant of public policy, of braggadocious and offensive and unstable character, given to the most bald-faced race-baiting and misogyny and demagoguery, could nonetheless be elected by our fellow citizens president of the United States?
It should be observed that this is not a question that will be answered by the election itself. If Donald J. Trump is not elected president of the United States on November 8, we will owe this not to some triumph of the superior American system or to the eloquent presentation of a progressive alternative but to the fact that this singularly offensive man offended too many voters, especially white, college-educated women. It will not be because he was rendered unelectable by virtue of his lies and race-baiting and immigrant-bashing and demagoguery.
On the contrary. Trump embodies grisly aspects of our politics that are not new but that, on him, are starkly illuminated. What are these? That much of our politics in this increasingly diverse country pivots on the hateful fulcrum of race, of racial fear and xenophobia and antagonism toward the Other, and that this has only grown in power and ugliness since the rise of Barack Obama and his coalition. That in vital matters of gender and sexuality and marriage much of the politics of the presiding culture is furiously rejected by a significant minority of the country as a “politically correct” and immoral imposition. That in the aftermath of a severe economic crisis—and after decades of economic stagnation for most Americans—tens of millions of voters feel so abandoned by the system that they offer their full-throated cheers to a candidate pledging to wholly dismantle it and put “in jail” his opponent. That the electoral system as it has evolved over that time and especially in the wake of such decisions as Citizens United has become starkly, shabbily, and spectacularly corrupt. And finally that entertainment and money in the grossest sense play a far more important part in our politics than any attention to public policy, and that the commercial press, particularly the broadcast press, battens on that reality to an increasingly shameless degree.
In the wake of Donald Trump all these tendencies will persist and perhaps—during a Clinton presidency—flourish, awaiting the next opportunistic figure who demonstrates the ruthlessness and skill to exploit them, and the steady-handedness, perhaps, to avoid needlessly alienating quite so much of the electorate. It is a grim and echoing reality, and one that we ignore at our peril, that many of Trump’s most egregious faults as a candidate are by no means intrinsic to his politics. He could be playing the ragged John the Baptist to a less outrageous and thus more dangerous savior to come.
Pondering the rise of the demagogue Cleon, Aristotle observed that he “was the first who shouted on the public platform, who used abusive language and who spoke with his cloak girt around him, while all the others used to speak in proper dress and manner.” Trump has raised the cloak. Whoever becomes president, it is unlikely to be lowered again in our lifetimes.

The Magic of Donald Trump

What He Could Do

The Election and America’s Future

In the Darkness of Dick Cheney